Sale on canvas prints! Use code ABCXYZ at checkout for a special discount!

Mural In Progress In Augusta Looking To Bring Hope Amid Protests 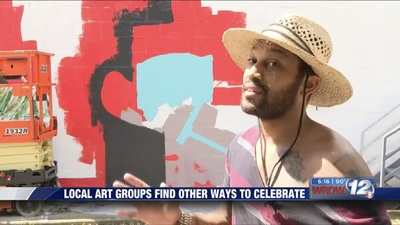 AUGUSTA, Ga. (WRDW/WAGT) - An artist is looking to bring hope to the community as protests continue across the country in the wake of several high-profile racial incidents.

Aort Reed has been busying painting away at a mural on 11th Street outside the Cyber City Circuits building.

Reed is focusing his mural on Jean-Michel Basquiat, an artist in the 1980′s that was homeless but still found a way to rise to fame before his untimely death at 27.

“Regardless of the discrimination that was going on then, because that was an issue, he just kind of exceeded limitations,” Reed said.

Reed’s mural is being funded by Westobou and the Augusta Convention and Visitors Bureau.

“It was important, again, to the building owner and to our organization and to Visit Augusta to make sure that these voices are being heard,” Westobou director Kristi Jilson said. 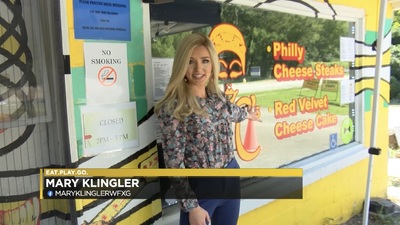 AUGUSTA, GA. (WFXG) - You might travel all over the country to find a great place to dine, but there’s one hot spot in the CSRA that’s been serving up southern charm and Philly favorites for nearly two decades - and it’s growing in popularity by the day, thanks to word of mouth.

Who knew flavor town was located right here in Augusta. Jackie M's and Son Cafe is one of Augusta’s hidden gems.

You'll quickly learn you don’t have to go all the way to Philadelphia to get a great Philly cheesesteak - especially when Jackie M and her son, Clinton Mccalla, have the greatest one in all of Georgia.

If you haven't already, you have to hit the town to find this Augusta classic. Located at 3308 Milledgeville Road, it's somewhat hard to miss.

You’ll know you’re there when you see an artsy yellow building with as much flavor as the food - it's covered from top to bottom with "soul-tastic" artwork by local contemporary artist and muralist, Aort Reed.... 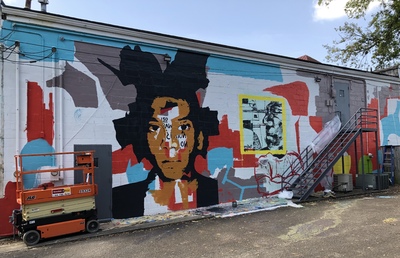 “Sometimes if you have a gift, or a drive, or a talent, than you can manifest a reality” Reed tells FOX 54.

Reed says his paintings are supposed to have more than just one meaning, and be something different people can relate to. He says his passion for art began at a young age when he would draw in his grandmother’s cookbooks.

“I think in 11th grade I had a really good art teacher, and she saw my potential and encouraged me to persue it professionally,” Reed says.

He says any kind of movement is about a collective of people, which he’s trying to communicate through this mural, titled, The Big Idea. He says the mural should be finished in October.

He says he has other ideas in mind for the future, involving creating other murals in Augusta, and a new art studio.

4P Studios
October 22 at 10:12 PM ·
Today was a pretty EPIC day, for our gallery and a couple of our artists. This beauty created by Aort Reed, was chosen personally, by the Production Designer, to be featured prominently in the film currently being shot in Augusta.

Watch out Augusta, 4P Studios is moving on up!!!

Still keeping tight lips on the film in question. 🤫 We will certainly share more when we can. Until then, all you fantastically talented local artists, keep making art!!!
🎨 ❤️ 🎞

The Story Behind The Georgia Cyber Center Innovation Mural

The story behind "Innovation" from the artist - Aort Reed

“Inspiration comes from multiple sources, I could name multiple artists from the history of fine art but I think that would be too typical. Outside of artists, what really drives me the most is empiricism, emotions & communication. All three sort of create somewhat of a diary or journal of the journey, in turn brings the work of Art to fruition.

Public Art in Augusta is just important here as it is everywhere else on the globe. Art serves as so many things to the listeners & viewers of it. Art is a communicator.. a therapy.. a relation & an essential part of understanding the “self” & everything outside of self. No matter if it’s music, dance, writing, film or visual art, it is one of the strongest communicators; & communication is the key to keen perception.”